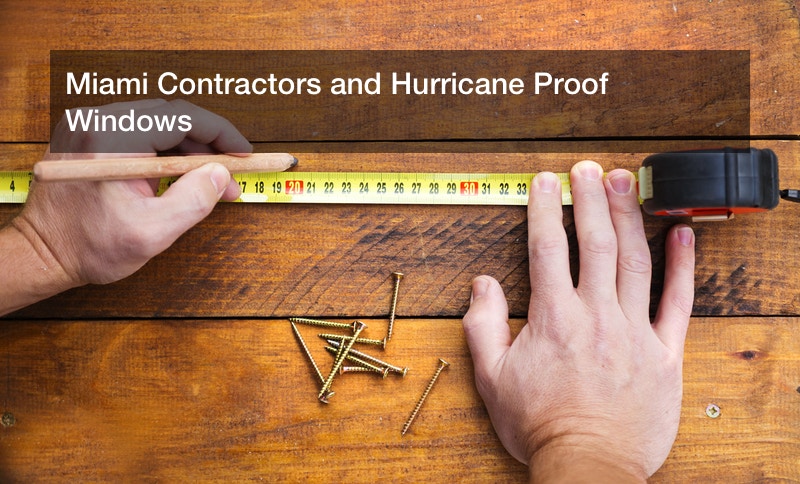 Some acts of nature are known to be highly destructive, and they may damage property and even threaten life unless the correct countermeasures are taken. A blizzard may bury a town in snow, a volcanic eruption may dissolve the landscape with a lava flow, or hurricanes and tornadoes may blast property apart with their winds. There is no real means of stopping or even redirecting a hurricane or tornado, but meteorologists are always hard at work studying and tracking these storms so that evacuation efforts can be done correctly. And while buildings and other property cannot be moved out of a storm’s way, specialized hardware and features may help larger buildings endure the worst of a storm. For example, hurricane resistant windows and hurricane glass doors allow condos, hotels, apartments, and more survive a hurricane’s strong winds with high impact glass. What to look for in hurricane proof windows? A hurricane proof windows manufacturer offers models with high impact glaze, and possibly reinforced window frames, too. Most often, renovation and construction contractors will buy these hurricane resistant windows and doors wholesale.

The Hurricanes and Their Power

Hurricane resistant windows and impact resistant glass doors are installed for a good reason. Hurricanes vary in their power and size, but even the smallest ones may cause considerable property damage, and the largest can devastate an entire city. Miami and other cities along the Florida coast are at risk, as are some cities along the Texas coast, too, and the Caribbean as well. According to records, some 158 hurricanes arrived in the United States throughout the 20th century, and 57 of them struck Florida in particular. These hurricanes boast strong winds, rain and flood waters, flying debris, and even tornadoes, and buildings must be ready to endure all that. Hurricane Andrew, back in 1992, spawned 62 tornadoes in all, for example.

What is more, meteorologists have noted that hurricanes in the 21st century are even more powerful and frequent than ever, and many scientists today attribute that to climate change and a warming of the world’s oceans. At the very least, 2017 saw some new records for hurricane power, and in that year, 10 different storms in a row developed into hurricanes. That has not happened since 1893, over a century prior. Meanwhile, 2017 also saw Hurricane Irma form, the most powerful Atlantic hurricane on record. This category 5 behemoth had seven trillion watts of energy and boasted 185 MPH winds for 37 hours. By the time the hurricane dissipated, it had damaged or destroyed 90% of the buildings in Bermuda and left many people homeless. It is possible that a hurricane of this staggering magnitude may arrive again in the near future, so engineers are hard at work creating newer and better hurricane resistant windows and glass doors, among other countermeasures. This helps protect property and lives alike when a storm arrives.

As mentioned earlier, large buildings in cities such as Miami cannot be relocated before a hurricane, but they can be built with hurricanes in mind. Such urban areas offer not only levees to contain rising flood waters, but also these hurricane resistant windows. During construction of a condo or office building, for example, contractors may turn to high impact window and glass door manufacturers for supplies, and install these wholesale windows and glass doors right away. And if an older building is bought, the new owner may look over all its hardware and determine that the windows may not survive a hurricane. If this is the case, hired remodel crews can fit in newer models of hurricane resistant windows and glass doors.

These windows work because they may have tough frames, and they also have a specialized glaze that allows them to resist winds and wind-blown debris alike. If windows and glass doors have a glaze system of +105/-130, they can endure winds over 100 MPH in strength and survive. This is important, since windows and glass doors are a weak point in buildings during hurricanes and tornadoes. Broken windows allow rain, debris, and wind to get inside and cause serious property damage, not to mention glass shards getting everywhere. But these hurricane resistant windows keep the inside safe, and winds and debris may bounce right off them.